Jerusalem Women Speak Out on Political Activism and Israeli-Palestinian Relations 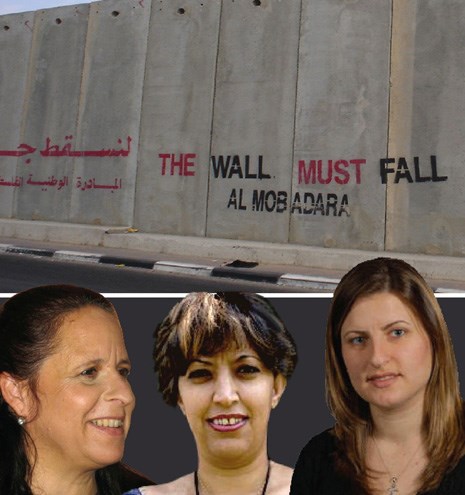 Photos of Ruth Hiller, Reem Mustafa and Marianna Khoury with a background image of the Israeli wall. Photo composite by Dan Faires

FAYETTEVILLE, Ark. –The King Fahd Center for Middle East and Islamic Studies in the J. William Fulbright College of Arts and Sciences will host the national tour, Jerusalem Women Speak, on Nov. 3 at 3 p.m. in Giffels Auditorium, Old Main, followed by an evening discussion at 7 p.m. at St. Paul’s Episcopal Church, 224 N. East St., Fayetteville. Both events are free and open to the public.

The speakers are all involved in political activism directed at ending Israel’s occupation of territories captured in the June 1967 Six-Day War and attaining full civil rights and social benefits for Palestinian Arabs living within Israel's recognized 1967 borders and holding Israeli citizenship.

They will each discuss their own life experiences as Jewish and Arab Israelis, as well as the factors that have inspired their activism and tactics for furthering their goals through peaceful, non-violent resistance.

They will also address these issues as women living in a highly militarized society in which sons, brothers and fathers — and increasingly sisters, daughters and mothers — have been drawn into cycles of war and political violence.

Jerusalem Women Speak is a national tour organized annually by the Partners for Peace Program sponsored by the Center for the National Interest in Washington, D.C.

The panelists will be accompanied by Harriet Fulbright, widow of J. William Fulbright and an emeritus member of the Council for the National Interest Foundation’s board of directors. In 1987, she became the executive director of the Fulbright Association, where she served for three years, moving it from Bryn Mawr, Pa., to Washington, D.C. For the last decade, she has lectured around the world, offering talks on diverse topics such as the vital role of international educational exchange, arts education, the life of Sen. J. William Fulbright, leadership and human progress, the impact of Sept. 11 and life as a cancer patient. She shared with her late husband a dedication to the search for peaceful solutions to conflicts throughout the world.

Ruth Hiller (Jewish Israeli): Ruth Hiller was born in the United States and moved to Israel when she was still a teenager. Hiller is a longtime peace activist and one of the original founders of New Profile, the Movement to Civilize Israeli Society. She lives on Kibbutz Haogen and is the mother of six children and a grandmother of four grandchildren. Four of her children refused to serve in the Israeli military. Her oldest son, Yinnon, was the first pacifist in Israel to get an exemption from the military via an appeal to the High Court of Justice. Hiller is an active member of a feminist group consisting of women from Palestine, Germany and Israel, and is also a member of the Coalition of Women for a Just Peace. She has represented New Profile before the European Parliament and before peace and women’s groups in the U.S. and Europe.

Reem Mustafa (Palestinian Muslim): Mustafa is a resident of East Jerusalem. She holds a bachelor’s degree in English with a minor in translation awarded by Bethlehem University in Palestine. She speaks Arabic and English fluently and is also highly proficient in Hebrew. She has extensive experience in working for international government agencies and has also worked as a national logistics assistant for UNESCO, as the administrative and finance coordinator for Terre des Hommes, as the Palestinian regional program coordinator for Hands of Peace, and as administrative and public relations manager for Seeds of Peace. Mustafa has taught English at the Surbaher Preparatory School in Jerusalem.

Marianna Khoury (Palestinian Christian): Marianna Khoury was born in Nazareth, Israel, but emigrated to the United States at age 18 and is now an American citizen. She was educated at private Catholic schools in Israel and at the University of California at Berkeley, where she was awarded a bachelor’s degree in Middle Eastern studies with high distinction. She is a fluent speaker of Arabic and can also read, write and speak Hebrew. Her concern for human rights has led her to volunteer as a mentor for Iraqi refugees under the auspices of the International Rescue Committee. She has participated in activities sponsored by the American Association for Palestinian Equal Rights, has contributed to the group’s newsletter, written articles on the status of Palestinians in Israel and has been a featured speaker at conferences.

“This panel is important because it will put a human face on a long-term conflict that is often portrayed in stark, sensationalist terms,” said Laila Taraghi, an instructor in political science. “The women are here to share their mutual experiences and perspectives and to explore avenues for common understanding and action. They may differ on certain points, but they are not coming to debate or explore polar opposites. They share a common conviction that meaningful social and political change will only come when parties on both sides, occupier and occupied, reach common accord.”

The women will be speaking at the Clinton School for Public Service in Little Rock prior to visiting the University of Arkansas.