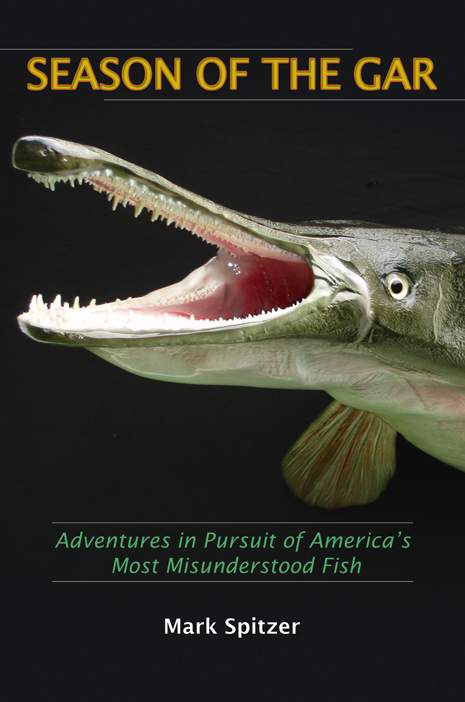 FAYETTEVILLE, Ark. – Season of the Gar: Adventures in Pursuit of America’s Most Misunderstood Fish, by Mark Spitzer (paper $19.95), published by the University of Arkansas Press, is a fang-infested, monster-headed, armor-plated romp through the prehistoric swamps and murky rivers of America’s most feared and demonized fish.

Spitzer recounts his lengthy and often frustrating quest from Texas and Louisiana, Missouri, and Arkansas to catch his own gar. He shares with us his sometimes bizarre angling adventures in search of this air-breathing freshwater giant (up to 10 feet in length and well over three hundred pounds) as he separates fact from fiction. He draws on folklore, science, history, his own pet gar, and even gar recipes to tell this unique and exciting literary eco-tale about a fish that has inspired imaginations for centuries, a fish many have hated, a fish many have thrown on the shore to die.

Popular naturalist writer David Gessner says, “I love Mark Spitzer’s passion and energy for gars and, just as important, for the pursuit of gars. Like the novelist and poet he is, Spitzer brings empathy, humor, and deep imagination to a type of writing usually mired in the merely factual. ... There is a wildness here — in both fish and man. ... Thanks to this we can read Season of the Gar and have our lives lifted.”

NPR commentator Andrei Codrescu says the “prehistoric gar, a fish sometimes mistaken for Nessie, has found its chronicler in Mark Spitzer. This is a work of history, adventure, and philosophy, as suspenseful a tale as any fictional thriller, yet amazingly true and thought provoking. Don’t be surprised if this book starts a gar-craze!”

Keith Sutton, author of Fishing Arkansas and Pro Tactics: Catfish says, “Bravo to Mark Spitzer! He dives headlong into the roiling, snake-infested realm of the gar and exposes ugly truths about the long campaign to rid the earth of these fearsome yet fascinating fishes. By debunking myths about gar, he does for them what Barry Lopez and Rick Bass have done for wolves. ... Season of the Gar is the best compendium of gar information ever put together. More importantly, it is an emotional essay about one man’s enthusiastic inquiry into the proper relationship between man and nature. It’s destined to become a classic in outdoor literature.”

Mark Spitzer is assistant professor of writing at the University of Central Arkansas, managing editor of the Exquisite Corpse Annual, and a lifelong, passionate fisherman. He’s the author of a number of novels, story collections, poetry and translations, and a past resident of Paris’s famous Shakespeare and Company bookstore. He was a recent guest on a television episode of Animal Planet’s River Monsters.

Spitzer will be reading from Season of the Gar and signings copies of his book at the Faulkner Country Library, 1900 Tyler St., Conway, Arkansas, on April 29 at 7 p.m.; the Garland County Library, 1427 Malvern Ave., Hot Springs, Arkansas, on May 22 at 3 p.m.; and at Fort Smith Public Library, 3201 Rogers Ave., Fort Smith, Arkansas, on June 18 at noon.

Spitzer’s book is also on sale at the University of Arkansas Bookstore in the Arkansas Union.