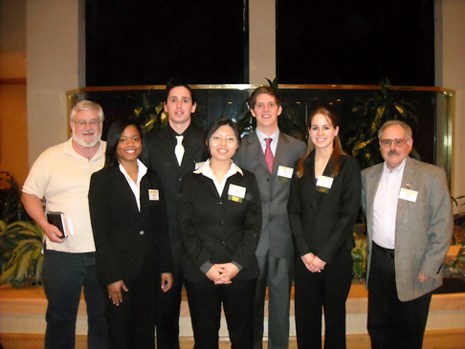 FAYETTEVILLE, Ark. – A student team in the Sam M. Walton College of Business at the University of Arkansas has placed second in the Operation Stimulus undergraduate logistics case competition in Denver, Colo.

The Denver Transportation Club sponsored the competition, which was held Jan. 28-30 during its 28th annual supply chain forum, in which 15 U.S. and Canadian universities competed for the top four positions.

The Supply Chain Management Research Center sponsored the Walton College team in the competition, and faculty sponsors John Ozment and Jim Crowell traveled with the team. The Operation Stimulus forum, attended by shipper and logistics companies, also included opportunities for students to interview with these companies, panel discussions and seminars, as well as a ski outing.

“The competition was a real nail-biter to the finish, definitely one of the most intense competitions in a number of years,” said Crowell, who is also director of the Supply Chain Management Research Center. Finishing first, just ahead of the Walton College team, was the University of North Florida. The teams from Georgia Southern University and Central Washington University finished third and fourth, respectively.

The team presented a case involving a global shampoo manufacturer with global manufacturing and distribution centers. In the United States, the manufacturer had a New York City manufacturing facility and a San Diego distributor. Western U.S. growth was in double digits. The students were challenged to meet this demand from a global sourcing perspective. The University of Arkansas team proposed to open a Maquiladora factory, a duty-free facility, in Tijuana, Mexico, just 15 miles south of San Diego, to add to the global manufacturing network already in place. In addition to the expanding needs of a U.S. west coast market, the team built their case for contingency planning to respond to global supply chain disruptions and individual market demand surges.